Save of the Season

Save of the Season 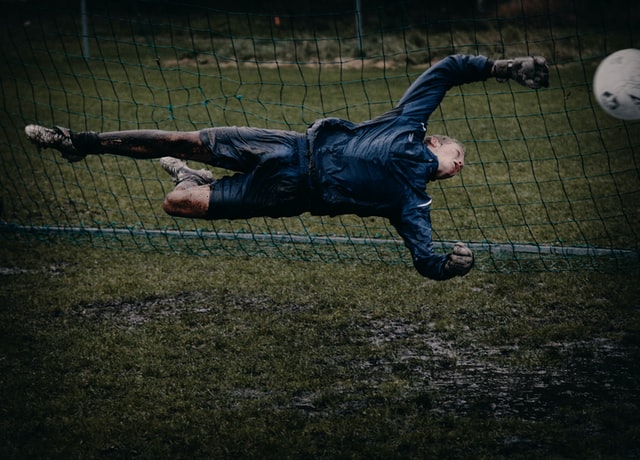 I had the radio on in the background this morning and there was a discussion about Aguero’s missed penalty this weekend in the English Premier League.  The discussion evolved to was it a poorly taken penalty or a well saved penalty.  One panel member said that most top strikers just hit the ball down the middle because they knew that was the one place the goalkeeper would not be.  All goalkeepers move early and gamble on a spectacular save but his argument was that goalkeepers should just wait until the ball was kicked and they would save many more penalties.

I remembered years ago as a child (early 1990s so that dates me somewhat) listening to the Irish Goalkeeping hero Packie Bonner talking about that famous save in the World Cup shoot out against Romania.  He had a remarkably simple approach to it. Do not move until the opposition player kicked the ball.  His logic made sense (to my young ears). If he waited until the kick was taken, he would know which way to dive and if the penalty was not perfectly taken, he would have a better chance of saving it.

That stuck with me because not being the most gifted on a sports pitch I had gravitated towards playing in goal. And this advice served me well. I became reasonably “handy” in goal (handy being an Irish way of saying good without giving the person too big a compliment). And penalties were a bit of a speciality of mine. I was lucky that I was playing 7-9 a side on astro-turf rather than cool professionals so I probably faced more poorly taken penalties than perfectly taken ones. But I would never move until it was kicked. I waited until I had the information.  It worked for me surely it could work even better for goalkeepers with actual talent.  Yet 30 years later the topic is still being discussed.

Thinking about it I wonder do we do something similar in business. Over 20 years ago in college I was learning about the importance of information to supply chain management and the perfectly logical conclusion that the faster we get information the better.  It is not a new concept.  We often hear how we live in the information age.  I remember reading about the Zara case study and how their focus was on getting information as quickly as possible from the sales staff in stores to the production planning teams in Spain.  All their store staff carried little PDAs (another thing that dates me) and as customers asked if an item was available in a certain style or colour or size that would be tapped into the PDA. Not as a search but to send the information to the designers for the next batch. They were waiting to see how the consumers were moving before committing themselves. And they were highly successful for many years with that strategy.

We have known about the importance of information for decades and we live in the “information age”.  But are you gathering and using information correctly? There is a desire in business to be fast and be first. Decide as quickly as possible (but it better be right).  There is certainly a balance between speed and accuracy.  You cannot be too slow. But are you too fast?  Are you like the goalkeeper hoping for the spectacular save of the season but missing the easy saves?

Ask yourself are you making too many decisions with incomplete information.  I will bet you are.  How would you speed up that information flow? Sometimes it can be an expensive IT system with PDAs in the hands of the troops on the ground.  But sometimes you can achieve a lot more simply.  In one past role as planning manager, I used to block out my Friday afternoons for calls with our sales team around Europe.  I found friendly Friday chats often worked better because they would tell me more about the market. Upcoming promotions. What our competitors were doing. Even what the weather was like (out product sold best in good weather). The information gathered on those calls was invaluable.

So here’s the challenge to you.  What one step can you take this week that will improve the information flow in your organisation.  Go take it.  And if you would like to PM me to tell me about it. I’d be interested to hear what steps you are taking.